Setting up the game:

1.) We’ve established levels of mastery for each LT, here they are: 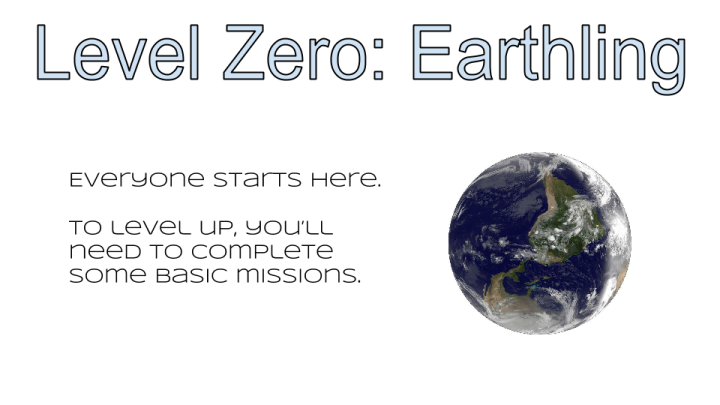 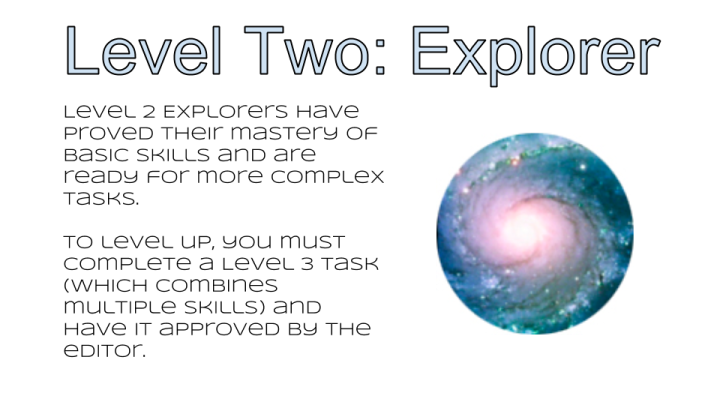 The way I’ll track the levels is through Socratic Brain. If you haven’t heard me talk about SB before, it’s the sbg system I use. Basically, I input my LTs and it lets me set a level for each kid on each one. It’s awesome, and I’ll definitely do a post on all the details later. For now, here’s a sneak peek at the interface:

It starts on Frogstar World A. Arthur and Trillian have landed and are confronted with a problem at the spaceport. We’re not sure if its a riddle just to unlock the computer or a legit problem. I’m purposefully keeping the story vague right now so that I have options for where to take it later. Here’s the activity:

View this document on Scribd

I would really like to get the ARG going this quarter, and I think my activity maps are going to be a great platform to make this happen. So far, they’re just a way to present the activities to the students, so that they can move ahead or get help when they need it if I’m not available. Click here to check out the map for 1.1: Write a rule to describe a pattern.

Badges! I want to use badges as a way to acknowledge excellent work, different perspectives, growth mindset awesomeness, etc. My plan is to print them on stickers and have students put them on their binders. But with such limited planning time (I’ve to cover classes the last 3 days in a row), I haven’t got the stickers printed out. Anyway, the first badge will look like this (everyone gets this one):

I’ve had trouble with getting students to model a quadratic function since forever. Apparently I’m not the only one, as it comes up often in the MTBoS. Last year, I made a step in the right direction by starting with the vertex form of the function. Well, actually let me go back one more step. We started our quadratics unit with absolute value functions. Check it out:

Now that we have a good idea of how to shift around a parent function, it’s time to try building a quadratic from scratch. (Side note: try patterns 106 and 108 at visualpatterns.org when you start your quadratics unit, some of your students will amaze you, or your money back guaranteed!) Anyway, so here’s my plan:
Actually, first a quick word about my schemes for next year. I plan to run my class like a game, so there’ll be quests, XP, leveling up, no grades, and other stuff I haven’t figured out yet. And I think I’ve got my theme. Wait for it… “Hitchhiker’s Guide to Algebra” (not sure about the name, but you get the idea). Total credit for this idea goes to Jessica Anderson (@triscicurious). Check out her blog, especially if you’re thinking about gamifying too, since she’s already doing it.

With that in mind, I am trying to write tasks around that theme so that I’ll have some ready to go for next year. The more I get done before the year starts, the more self paced and non-linear my class game can be. So I tried to make this task fit with a Hitchhiker’s Guide theme. Hence the “Intergalactic Lower Appendage Ball League”. Get it?
Anyway, when students come in to class, they’ll get into groups and each kid will receive 16cm of string and this handout:

Inspiration credit for this idea goes to Scott Hills (@Planting_ideas). Thanks Scott!
As they wrap up measuring and recording, I’ll put the Desmos graph (woot images!) shown below up on the smart board and ask everyone to come up and enter their results. Go ahead, click it and put in your results and see what you think, I’ll wait! 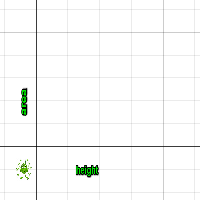 If they haven’t already, they should notice (once we’ve got enough up on the board) that the points are forming a parabola. BAM!! Quadratic Modeled!! Well, almost. Each kid will then complete a summary report of their findings where they’ll have to write a function and think about key parts of the graph. Then they’ll share their thoughts with their group, and then each group will make a whiteboard to display for the class. If we have time, I’ll have them blog the results at our class blog.

What do you think? Got any ideas for improvements? Have you done something similar before, any tips?

At Twitter Math Camp this summer, I got the opportunity to work with a small group of amazing Algebra I teachers on planning a linear functions unit.  While the crazy of school has thwarted me from following through on all the plans, I still got in a thrown together version of one today.

So, the idea was to compare pizza companies and see who had the best deal.  But each company provides us with different info about their prices.  Check it:

To get things started, we all did Pizza Hut as a class.  We decided on the function c(t) because cost depends on toppings.  We wrote the equation c(t) = 10 + .85t.  We used the function to generate a table using the domain [0,5] because some people might want cheese pizza and 5 is a good max number of toppings.  Then we graphed y = c(t) using the same domain and we were done!  They did most of the work, I was just there to prod them along if they didn’t know what to do next.

Next, I told one half of the class they were to be my “Papa John’s Experts” and the other half they were my “Domino’s Experts”.  If someone had an issue figuring out one of the representations, they were to see an “expert” from the other side of the aisle.  It worked great most of the time; they found help on their own when they needed it.

I thought the best part was finding the cost per topping for Domino’s.  Since they were only given two points, it was really like asking them to find the slope of the line between (2 , 10.7) and (5 , 14).  But in context, it was not a scary math problem, just “well, there’s three more toppings there and it costs $3.30 more, so it’s $1.10 per topping”(their words).  Later I showed them (out of context) that they had done the good ol’ (y2-y1)/(x2-x1).  One kid even seemed mad that I had “tricked” him into calculating slope, as if he was proud of not being able to do it and I ruined all that for him.  Weird.

Note: It is fun being able to refer to the y-int as a cheese pizza all day! (Also, it was a great follow up to the 100×100 burger problem from Kaplinsky in which the y-int is a bun and dressings.)

Next class, we’ll choose a company and make whiteboards to defend the choice.  Is Domino’s really always the cheapest?  Is cost all we care about?  Tune in next time to find out.  🙂

Oh yeah, and I started class with a pizza themed counting circle!  We started at 10.5 and counted up by 1.25 at a time.  It was a good one, it went pretty fast.  And we did the “toss the ball and make a prediction” game, where I call “stop” and whoever has the ball tosses it across and we have to predict what that person will say.  I ❤ Counting Circle!